Everyone has something they are insecure about. I had one big insecurity. The one insecurity people would always talk about. The biggest insecurity people would always make fun of. My teeth. I would never smile in pictures. I would always cover my mouth while laughing. I just knew it didn’t look good and I was ashamed of it. So ashamed and people knew. Everyone knew. People wouldn’t say that my face was ugly. They would say my teeth were ugly. What a hell of a lifetime was that.. I’ve been through this bullshit for quite a time in my life..

I was 11 when it happened. I was playing outside with a few kids in my street. I had this scooter step and I knew a few “tricks” and one of them was jumping of the sidewalk, yaaaay super cool! So here I was, trying to get a lot of speed and jump of the side walk. I had a few good landings but then suddenly my front wheel got stuck when I was about to jump. So I smashed my face on the pavement. It all happened so fast that I sat down and touched my face and saw all the blood. I screamed and cried and the mother of my friend ran down to help me. She brought me home. As I mentioned before, I got bullied at school so the next day I didn’t want to go to school cause I was so scared people would laugh at me. My left side of the face was scratched open but I didn’t see what happened to my lip and teeth yet. So I woke up the next day and my mom and stepdad were laughing cause my lips looks like a failed lip injection job. My lips were so swollen, I couldn’t even speak. But yep, my mom sent me to school anyway. I had to cope with all the bullshit again. They would call me “Zumbalip”.. but still thought I was super cool for jumping of the side walk.. yep, it was a weird situation. How was it cool to have wounds all over your face.. eventually time healed my face and my lip went from botox to normal again. But there it was, I was so young when it happened and the slap messed up my teeth badly. It started to grow into different directions and I had one tooth that died from the face slap but I was too scared to have a root canal treatment. So this tooth is still here but darker than the others. My mom wanted me to get braces but my teeth were still growing. So my dentist said: “Okay we have to wait a few years.. Your wisdom teeth are still coming. If you get braces now, they will push your teeth back into its current position. I hope they will be visible by the time you’re 21”. NOT. They were slowly showing themselves and I think were fully grown when I was 23. I heard several stories about pulling teeth and that freaked the shit out of me. Yep I was a pussy..

Anyway, yes I was insecure about my teeth and also that was one of the things I got bullied for. No one knew why I didn’t “fix” my teeth. It was better to wait like the dentist said. And I was also fucking scared of the dentist. Remember the girl I spoke about when I was 15/16. Remember from part two that I said: “This is another story to tell”. Here we go, her friends made it even worse.. This one guy, he was a “rapper”, cheated on his girlfriend multiple times and I knew but I never snitched on him cause who am I to do that (oh oops now I did). Well he made song about me HAHA. When I heard about that, that was funny. Funny but pathetic. Funny and upsetting. Yes, I’ve cried in my room for days. I remember the lyrics: “if you would give a blowjob with those teeth, you will hurt a dick” – in Dutch it rhymed. And…. I was 15, never saw a dick in my life but hey, I was used to it already. In those MSN groups, yep, I read crazy things. One day a girl said: “Don’t worry girl, I would happily slap your teeth back into its right place. For free”. Okay cool..

But it was my biggest weakness. My teeth. I was so ashamed of it that I wouldn’t thought “friends” would talk about it. Yes, “friends” cause these people aren’t in my life anymore and I considered them as my friend. One day, a girl messaged me and my friend. She told us her ex boyfriend, who I thought was our friend, spoke the worst about us. He was a midget, like a real one. Super small guy. I never looked at him differently. He was a person. A living human being and being a midget would have been hard for him already right. I decided not to make him feel miserable. I thought that this would say more about him than me right. So I messaged him. Saying I felt sorry for him. Let him know I was a faithful friend to him. I always had his back. I never spoke bad about him. I supported his ideas and I would model and promote it whenever he needed it. I told him I hoped he was happy with his life. Because if these kind of people I lost faith in humanity. I didn’t trust anyone anymore.

In 2016 I started to take out all wisdom teeth. It happened because one of them got inflamed so my dentist said: “I want to take them all out now and prepare you for your braces”. It was a hell of a ride again but I was on my way to my braces and it was really exciting. It took a while tho. My jaws had to recover from the surgery several times. My dentist also made a few mistakes, lol but I’m still here. I wasn’t afraid of the pain, more just nervous. I would sit down and just curse if it hurt and my dentist and I would laugh about it. “Just get in there with that needle” – Eventually I was supposed to get my braces in December 2016, on my birthday. But it had a small delay, it was okay, it was coming anyway….

In February 2017, Fleur and I were on our way to Hawaii to attend Pow Wow Hawaii. At the airport I went live on my Instagram story. Telling everyone about our trip and how excited we were. Suddenly someone with a fake account said: “Better fix your dragon teeth”. I saw that pop up and a lot of shit rushed through my mind. All the shit I coped with. It all came back. I tried to stay calm: “It’s okay, it’s okay you’re working on it”. Then my mind went to thunder and I said to myself: “Who the fuck does this fake pussy ass person think he/she is. Coming at me with a fake account”. So before Fleur could stop me, my bomb exploded. I gave this person the shits. I said: “you’re so cool for saying this with a fake account! You are way too scared to say it in my face”. (I still don’t know who you are but fuck you). My whole trip was ruined!!! I was so upset! Why was my dentist so slow at taking care of my braces. Why didn’t I have my braces already? Now everyone will pay attention again to my fucked up-not straight teeth. I was reminded again at all the times I got bullied. I cried again. I was pushing so much money into fixing it for myself and only one person had to say something and I thought the whole world would think the same thing about my teeth.. AGAIN.. 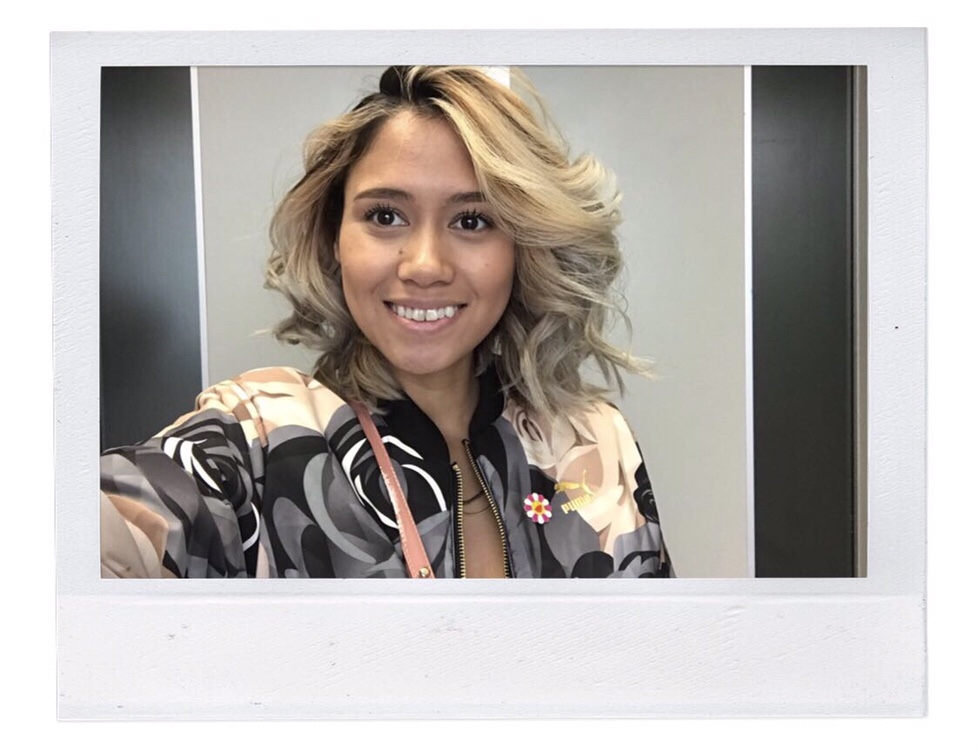 The day I was getting my braces I was so excited and happy. I was working that day so at work, a few knew I was getting it. I took a quick selfie of my teeth before. I walked away at the dentist after 45 minutes I think. With my new WHITE braces. White. My dentist thought it would be a good idea and so he was right! It was so weird and painful. Especially painful while eating but I was like: “I’m hungry”. At first, no one actually noticed I had braces. When I got back to work, I had a big smile on my face. I wanted everyone to see my braces. I would say to everyone: “HEY LOOK! I GOT BRACES!” It was literally, crooked teeth with braces cause it was all over the place. After a month my teeth were so straight already. I couldn’t believe my eyes! And you know what, until today NO ONE EVER SAID A THING ABOUT MY “DRAGON” TEETH AGAIN.

It’s been a year since I got my braces and let me tell you, THEY GOT OFF A FEW DAYS AGO!!! I never seen myself with straight teeth!! I’ve seen my teeth grow but into the wrong direction since the fall when I was 11. Until now I never had straight teeth. I thought I was going to cry and I did cause putting my Invisalign on hurt as fuck. I spent €4000 on this and I know, it will not disappoint me. I wear my Invisalign now, 24/7. It was painful at first but now I’m three days further and the pain is mostly gone. I just can’t eat or talk properly but that’s fine! I’m getting used to it. Only one extra retainer on the bottom next month!

But, I’m already preparing myself mentally cause yep, I still need that root canal treatment.. BUT I DONT CARE. “Just get in there with that needle”. Oh man. I can’t wait so smile at everyone who ever spoke shit about my teeth. KILL EM WITH KINDNESS! I did this for ME!

Online Creative and Artist of CAREAUX. My name is Caroll Lynn and my artist name is CAREAUX. I'm a sneaker illustrator turned footwear designer. After a study of four years, I landed at Filling Pieces as their first Womens Footwear Designer. In 2016 and 2017 CAREAUX released her first collaboration with PUMA. Besides working for Filling Pieces and working with PUMA, I also worked on illustrations for Nike, Adidas, Lacoste, FILA, DIESEL. More of my previous work can be found via portfolio I illustrate everything I like myself and sell my favourites. Most of my work is made on canvas but I'm always open for discussions and requests. For collaborations, contact me via the contactform. My instagram is known for her sneakers and feminine style. The content created is focussed on fashion and art combined with traveling - #SHECOZY

2 thoughts on “Personal Stories After – Part 3”

This site uses Akismet to reduce spam. Learn how your comment data is processed.